I finished the first models of my warband for the upcoming Ondroma campaign. My idea was to create a tribe that lives and hunts in the Wildlands of Namorra Prime. After the decay of the planet and the loss of governmental structures they sattled down in the outskirts of Kargon V. 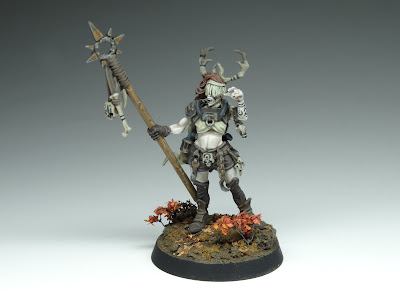 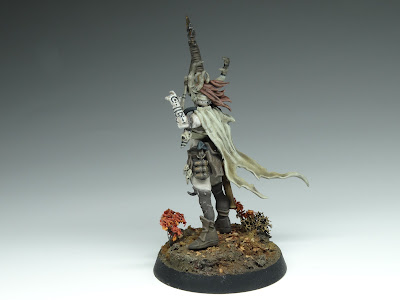 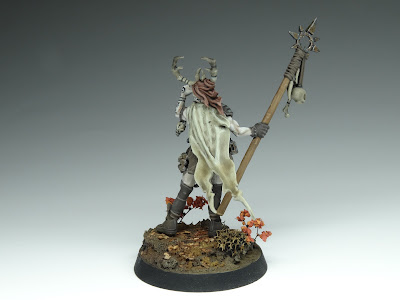 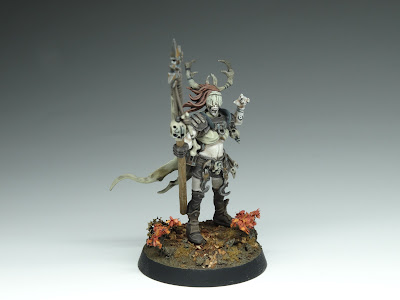 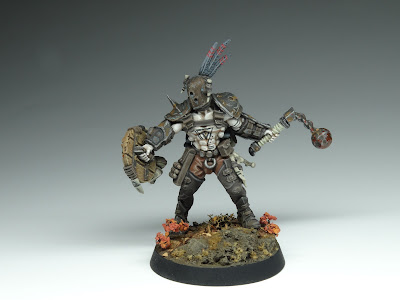 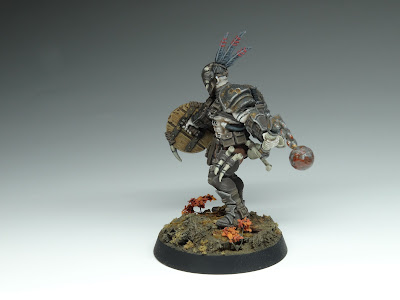 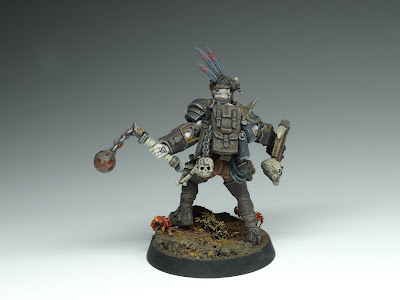 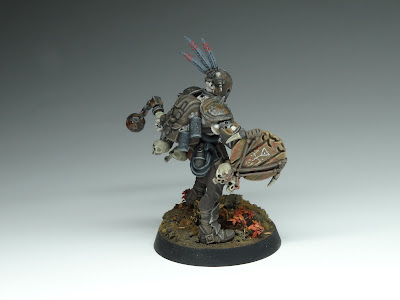 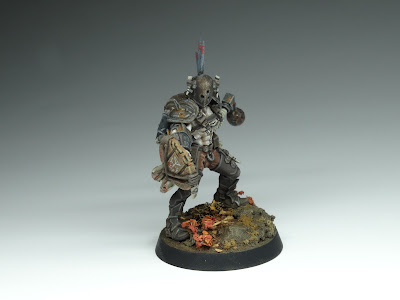 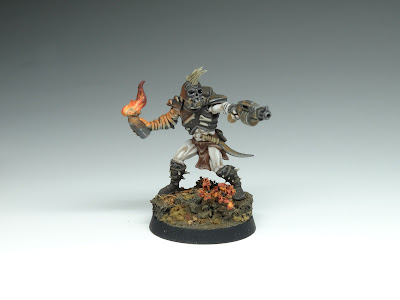 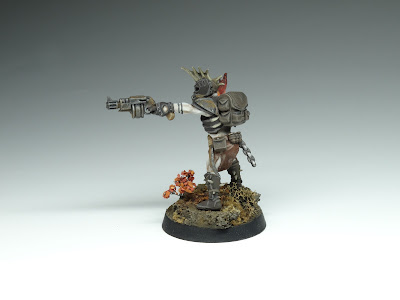 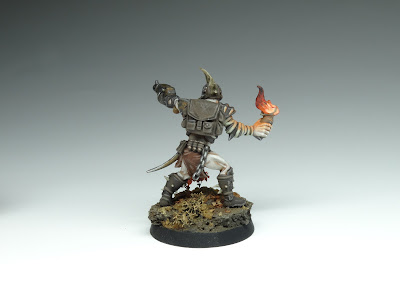 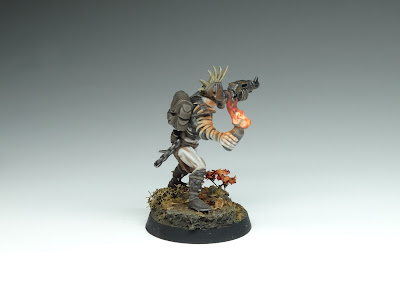 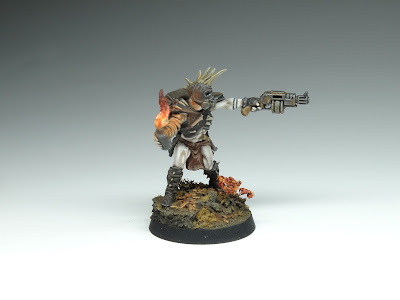 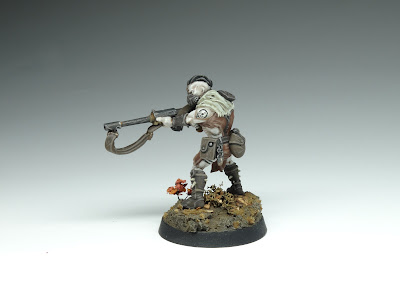 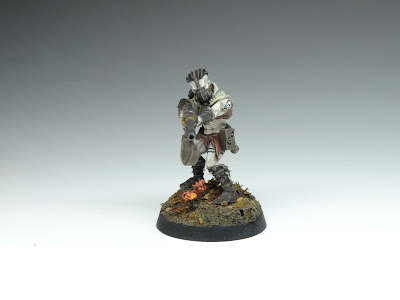 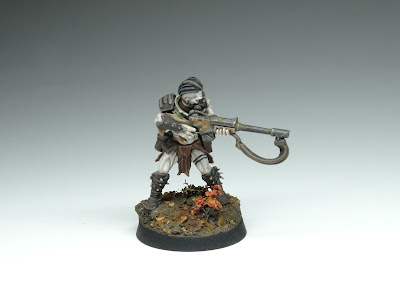 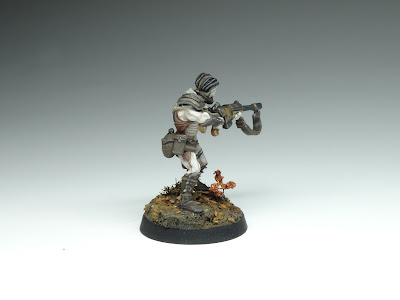 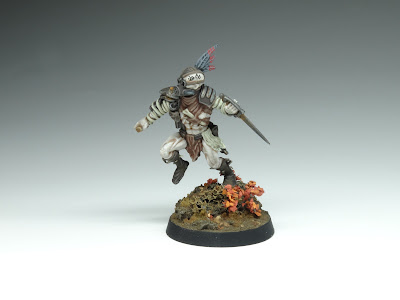 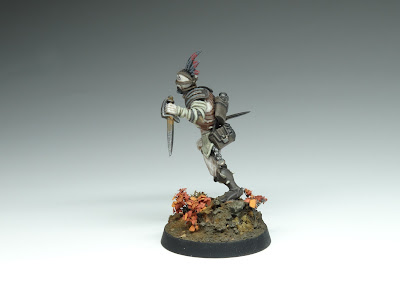 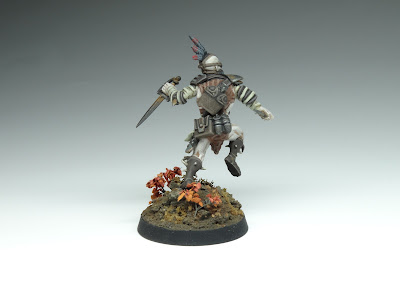 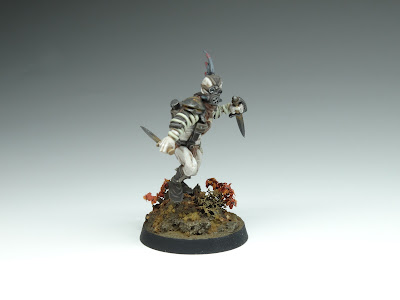 The three youngbloods are based on Hunter Orcs from GW's The Hobbit range which are a lot smaller in scale than the Blood Bowl models. But for the desired roll as kid soldiers they are perfect. I wanted to include this grim dark topic, because it is very rare in the grim dark 40K universe. The 'bigger' models are based on Blood Bowl Dark Elfs. For the Arq'Muther I took a lot of inspiration from the appearence of this lady, tried to catch her shamanic vibe and merge it into a 40K style.

The tribe's background, lore, etc. will follow in a later post, as soon as I finally completed this warband ;-). Thank you very much for your visit. Feel welcome to comment and stay tuned!

Posted by LarsonicMiniatures at 1:58 PM 2 comments: 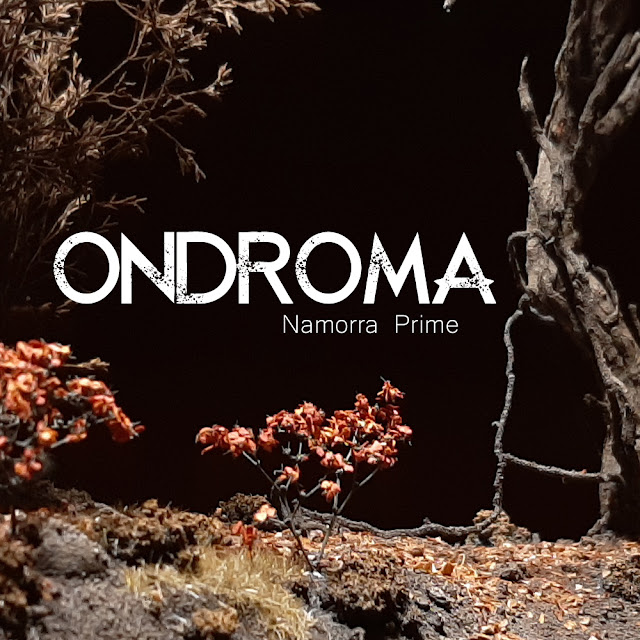 Namorra Prime was once a civilised world of the Imperium. However, after centuries of civil war, brutal conflicts, and natural disasters, there are only a few Imperial strongholds left. Although Imperial in name, many of these strongholds are led by vicious Leaders, that are more similar to warloads than loyal followers of the Imperial Creed. The progressive decay of Namorra Prime lead to the rise of warbands, tribes, cults, and scavengers, which started a vicious cycle that further pushed the planet into regression. If the Administratum attempted a planetary census, Namorra Prime would undoubtedly be reclassified as a feral world, however the Imperium’s bureaucracy makes the probability of such an effort virtually nonexistant.

Hive City Kargon V was not exempt from the mayhem. The ruling Houses fought bitterly to retain control of the crumbling hive, with their Nobles trying to empower their forces and craft fragile alliances. Years of this internecine conflict, coupled with the steadily diminishing resources of a ravaged planet, dulled the Houses’ perception of anything beyond their own inflated egos, preventing them from seeing a rising darkness that was flooding the planet. Suddenly they realized an even more horrific danger had festered while they struggled for existence. Although incomplete and nebulous, records suggest Haunting Shadows came out of the shadows in every sector, a dark and powerful enemy, possessed by something, a morbid rapture. Conflict continued for many years, possibly for decades. As the 41st millennium comes to a close, it is not clear if there was the victor, or if the bloodshed continues unabated, for transmitted records have long since ceased.

During this tenuous time, the Planetary Defence Forces of Namorra Prime abandoned their sacred duty and retreated to their base on the surrounding moon. This base, once a small space port, was fortified to become the fortress Receptum. Archived records suggest that in cases of extreme need they were beseeched by local governments or even some of the warlords for support or rescue, but such requests fell on deft ears, for the PDF had completely cut ties with Namorra Prime, leaving them to their dire fate.

An emergency signal was detected a few days ago, its origin in the Ondroma Sector. Although the encoded message may be corrupted, it is certain that it originated from the Namorra Prime. Rumours suggest that a lost STC may have been recovered in the system, but no records can confirm the veracity of the claim. The Adeptus Administratum could not leave such rumours uninvestigated, and has sanctioned Rogue Traders to converge on the Ondroma system. This is only the official response of the Imperium of Man, however. As can be imagined, the destress signal has attracted all manner of other interest, including the Ordos and other less reputable factions. The Adeptus Mechanicus undoubtedly have deeper knowledge about Ondroma and their former Manufactorums on Drayker Zulu, but they remain curiously silent. Agents of the Ordos confirmed that they secretly sent out an exploration fleet. And it is very probable that the Inquisition is already heading towards this system as well.

Ultimately, it is still unclear how the rumour about the STC appeared, but it is simply too important to ignore. Furthermore, the signal was sent over an unimaginably long distance, making its interception by various Xenos races a certainty. Such holy data and technology cannot fall into such unclean hands.

All manner of explorers try to reach the system in secret to start orbital reconnaissance. The source of the signal may have been located in a still working relay station on the outskirts of the Wildlands, near Hive Kargon V. Therefore, this is the first point for the converging forces to start their investigations to gather more information. The first step into the abyss.
There are different factions on Namorra Prime that are aware of the incoming invaders, and want to decipher what is happening. Having been cut off from the Imperium for so long, they were surprised and shocked by the sudden arrival of these strangers. They remember stories and legends that their parents told them long ago. Stories of war, decay, and fear. Stories of a time that was. Stories told from generation to generation. Civilians hide, flee and seek shelter. Still loyal governors hold out hope for their long-awaited help. Warlords fear a loss of territory and power, or may see a way to increase both. Isolated tribes bring in their harvest and send out their warriors to protect their holy places. Cults see a chance to fulfil their beliefs, or see a prophecy come true. Renegades and Marauders gather their forces to scavenge new treasures. A dark new era is beginning, and it begins on Namorra Prime.

The Ondroma System in the Segmentum Ultima is named after his central planet, the Gas Giant
Ondroma. This red giant appears like the main sun on the surrounding planets, but there is another sun far away that actually enables life in this system.

Levia VI is classified as a former Mining World. There are ancient structures all over the planet’s surface and below. But, so far as discovered, these aren’t typical Necron tombs. Their origin was
never discovered, neither who built them or for what purpose. It's a planet with a harsh environment and still offers a lot of resources which were needed in the Mechanicus Factorums on Drayker Zulu. The consistent expanding mines, imperial outposts and exploiting of resources lead to a harmful atmosphere. Millions of slaves were forced to work in the mines by the imperial government. Clans and gangs arisen over decades and a revolt was inevitable.

Drayker Zulu is classified as an Industrial World. It was ruled by the Adeptus Mechanicus and
colonised for supporting the other worlds with machines and weapons. There are rumours that the Mechanicus recovered or found an STC in this system, but that could never be confirmed. What is confirmed, on the other hand, is that a part of the ruling Mechanicus allied with darker powers and were intended to isolate the planet. The recorded history of Drayker Zulu stopped during the systems decay and remains unknown.

Rith is classified as the Agri-World of the Ondroma System. Back in the wealthy days of the System it provided food and water for the colonised planets. The planet’s actual status is unknown for more than hundred years.

The Team (Players, Contributers and CreativeDirectors) is for now:

Between the Bolter and Me

So, expect to see some awesome stuff and thank you very much for your visit! Stay tuned and best regards!

Posted by LarsonicMiniatures at 2:09 PM 3 comments:

Shadow of the Wildlands

The Arq'Muther told the tribe's youngbloods the legend of the Haunting Shadow, before they go on their first lonely hunt in the Wildlands. There are many serious dangers on Namorra Prime and some will wear your skin and eat your soul. Only a few lucky tribesmen, who survived those nightmares, could told their story and warn the others.

Hi everyone! I've finished my first NPC Monster for the upcoming Namorra Prime campaign. My Herald of Slaanesh was selected for this role and this was the perfect opportunity to finish this model.

I wanted a really grim-dark colour scheme and discard my intention to use my recent slaanesh colour scheme. This is a fact I'm really happy about. I also implemented the recommandation of the Krautscientist, who suggested a slaanesh model with cloth made of skin. All colours are rather desaturated and the only colour highlight is found on the base.

Meanwhile I have collected a group of awesome hobbyists who will attend, contribute and support this event in many different ways. There are some very well known names. But I will talk about the event separately. And be sure, I'm really looking forward to share this with you! ;-)

Sadly my usual camera setup is not available at the moment, so I have to use my smartphone which is ok, but not as good as the Cybershot I've used before. Just saying, if you wonder about the different photo quality.

Thank you very much for your visit. Feel welcome to comment and stay tuned!
Posted by LarsonicMiniatures at 7:59 AM No comments: