Another week without working on any mini. I'm totally in my terrain creation mode and have finished my first pieces. I haven't build much terrain before, only my first Kill Team Board. So a lot of techniques I had to do for the first time. A big thing to consinder is that some steps really need a long time to dry or cure. But, after the first attempts you get a feeling for that and are able to deal with that. I used these hours for preparing this or creating that for the next steps. So here are the first impressions of my vision for the Namorra Prime Wildlands, in the outskirts of Hive City Kargon V. A dark landscape with a dense vegetation. 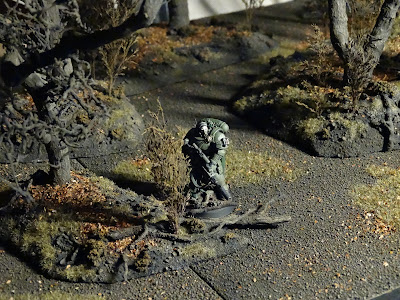 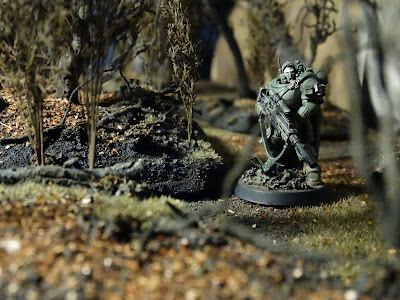 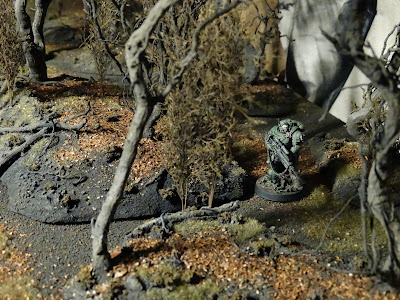 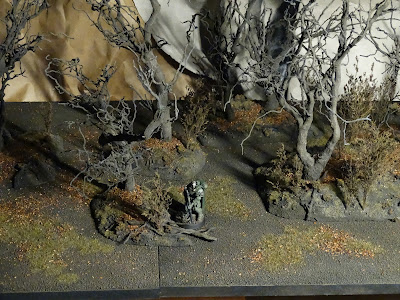 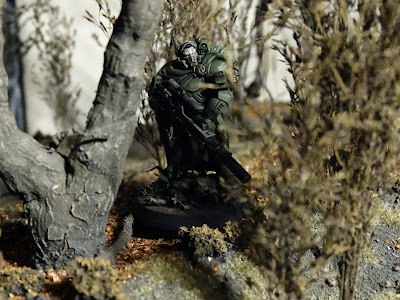 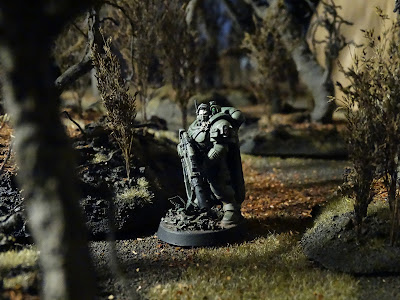 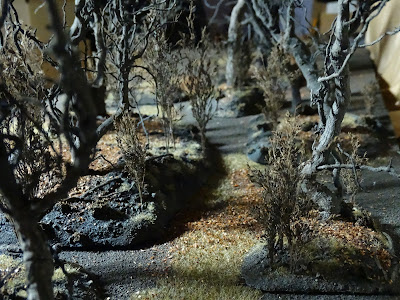 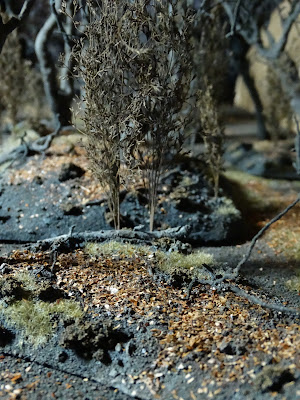 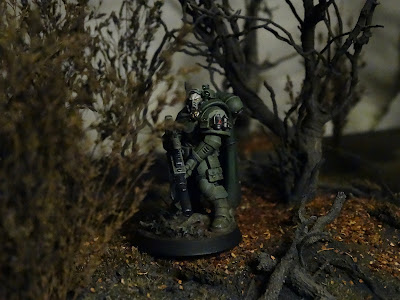 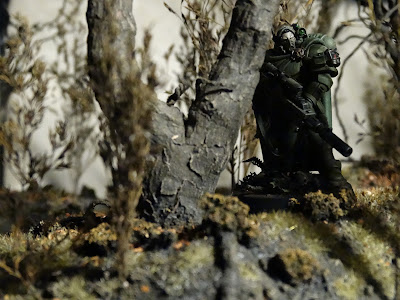 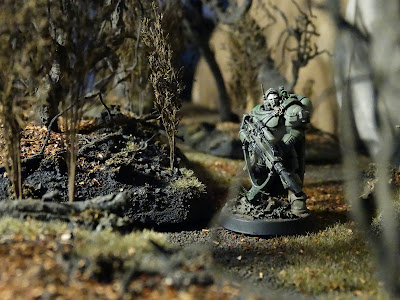 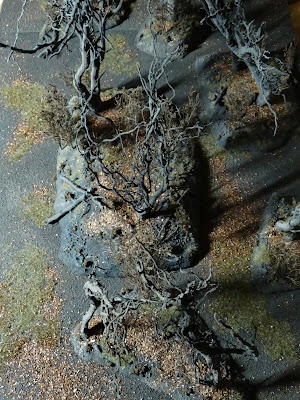 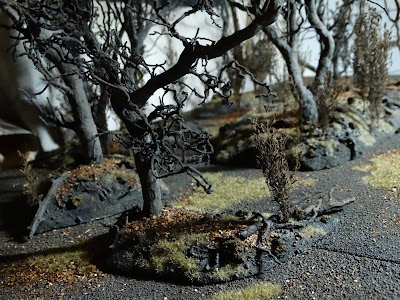 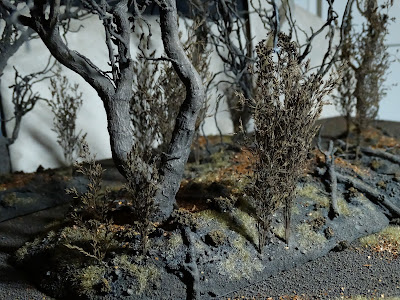 I'll post a more detailed 'HOW TO' in the next parts of this Terrain-Series.
Thank you very much for your visit and stay tuned! As always, I'm looking forward to your feedback.
Posted by LarsonicMiniatures at 10:56 AM 2 comments:

Sorry for the lack of updates. Currently I'm working on my Terrain Project. I am going to make several modular Kill-Team Boards for my upcoming Event -  the Ondroma Campaign. The Story will take place on Namorra Prime, which was once an imperial World that suffered war and decay over a long period. My vision for these boards is a mostly ruined world with a lot of vegetation.

Without further ado, lets jump into this to keep things short. ;-P

I started with a 3mm plastic-card and a box of Sector-Imperialis ruins. I used sandpaper to roughen the surface of the plasic-card. I think this is good for using non-plastic glues. For the trees I've collected a lot of roots in the woods. The were sealed with a mix of water and PVA (3:1 plus a drop of dishsoap). First I sprayed them with 99,9% Isopropanol Alcohol, followed by the PVA-mix. The alcohol and the dishsoap break the surface tension and allow the glue to get into every spot. Another reason for the use of the glue is, that it fixes the dirt to the surface. After the roots were dried I used 'No More Nails' to glue them onto the plastic. Afterwards I added some debris with cork, sprues, plasticcard and various plastic pieces. Texturepaints and sand where placed on top, to give it more texture. More debris will follow at a later time. 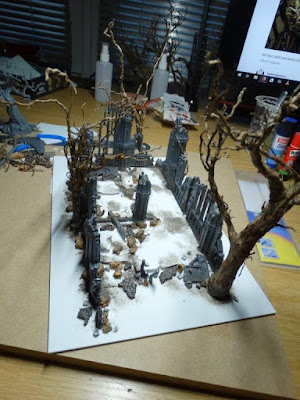 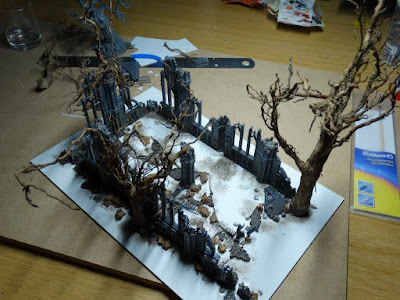 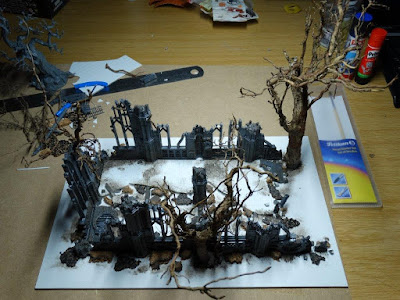 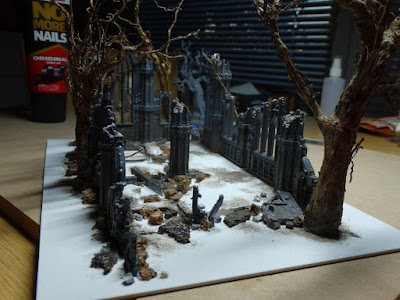 The next step was creating a base. I used a 20mm foamboard, which was cutted in shape, glued the plastic-card on top and used SculptaMold to create the surface. I used projector-foils as a 'workspace'. This resulted in a very even surface and also the SculptaMold doesn't stick to it after it has dried. Then the edges were sanded. 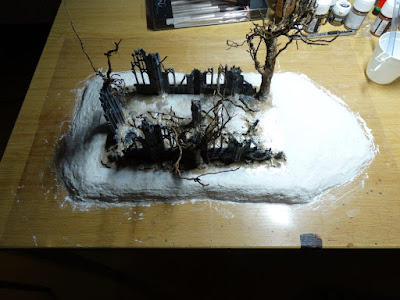 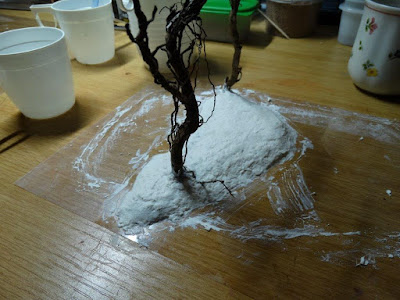 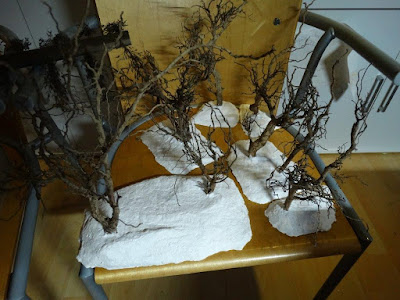 A lot of these materials need a very long  time to dry. So in the meantime I wanted to create another kind of smaller trees and bushes. In the unmowned and toasted garden I found something that caught my interest. 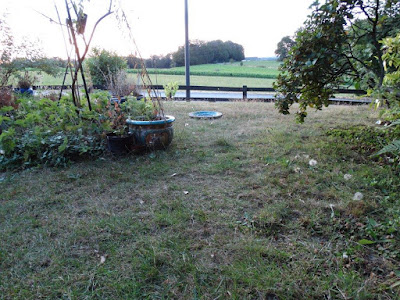 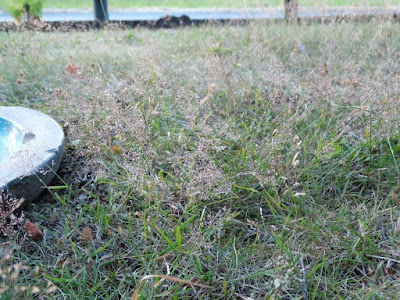 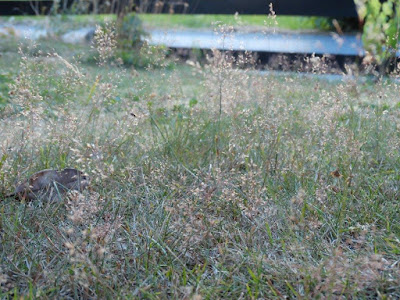 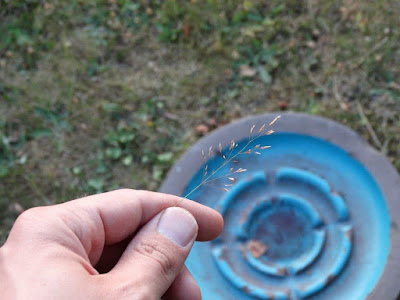 I harvested hundreds of these in various shapes and heights and glued various pieces together. I used Ponal Express PVA in a bottle, took 3-5 stems, which could then easily be inserted in the bottle's tip. After these were dried, they were taped on a wooden ledge and sprayed with alcohol and the PVA-Mix, mentioned above. Then I used black and brown primer (Army Painter spray-cans) to change their color. I also wanted to paint then with acrylic paints, but that didn't work well. So I used dry pigments and coated them with Army Painter's matt varnish (spray-can). 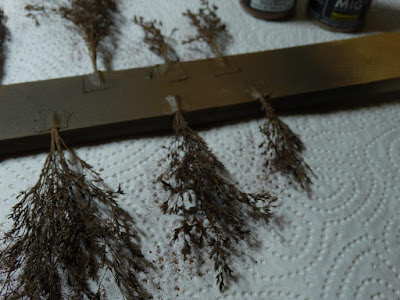 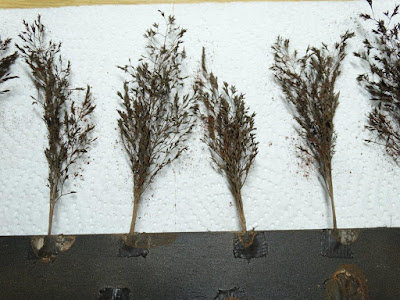 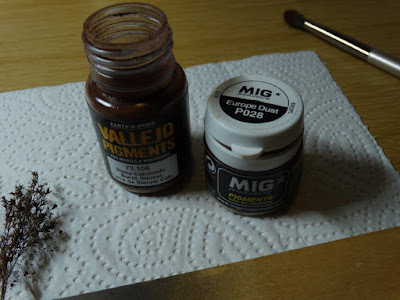 I'm really pleased with the result so far. But I'll try to give them a drybrush soon, to add a bit more contrast. I made quite a lot of these trees, but I think I'll need to make a lot more to get a rather dense vegetation. 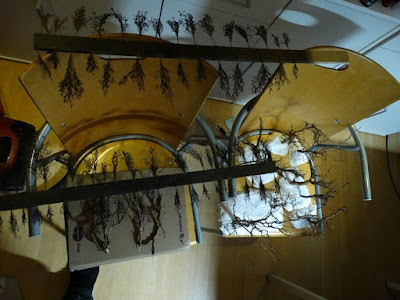 That's what I've achived in a couple of days and it feels like a good start. I have a lot more ideas and plans for this project and I have a lot of fun trying all this different and new things. A welcome change indeed.

Before finish this post I would like to advertise the 99,9% Iso alcohol a bit more! Actually I bought this stuff to strip a mini, which was primed horrible, due to the very hot temperatures. It was coated in a 3-colour zenithal way. I spend 3,50 Euros for a 1-Liter bottle. I placed the mini in a plastic bowl and filled it with alcohol. After 20 minutes I took the mini out and used a soft toothbrush to get some paint off. I repeated it again and also used an old drybrush to get in every spot. It worked a treat and the model was perfectly stripped. The best thing - it dosn't harm or loosen glued parts (plastic-glue) and green-stuffed parts! The model was stripped and primed again in under one hour! Great experience ;-) You can also the alcohol to clean your brushes.

Thank you very much for your visit and stay tuned! As always, I'm looking forward to your feedback.
Posted by LarsonicMiniatures at 10:32 AM 2 comments: